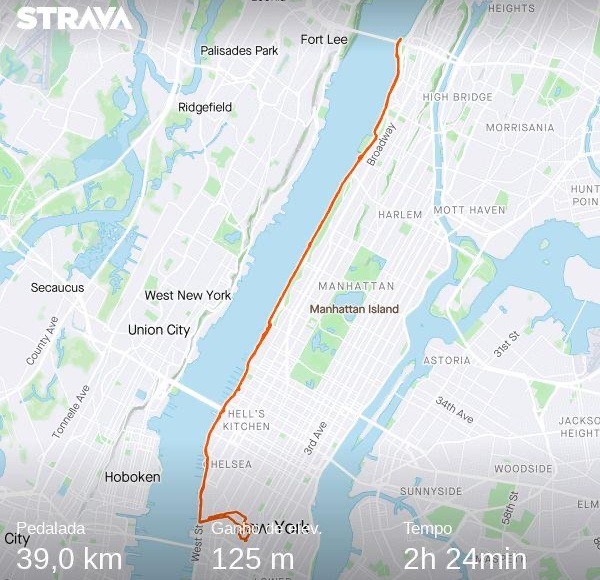 My First Ride in New York

It was on a Sunday when I was gifted my first bicycle as an adult. I’ll tell you more about that later. Excited with it, I decided to ride around the neighborhood and towards the Hudson River. Riding on the cycling lanes, I passed by some famous landmarks of the city, such as the Washington Square Park, the building where the characters from Friends lived, and Joe’s Pizza. Upon arriving at the Hudson River Parkway, I rode north, without thinking much about where to go.

The path is quite flat, and I was surprised how easy it was to cover miles and miles. Cyclists there are generally well-behaved, but some pedestrians (mostly oblivious joggers and tourists) would traverse erratically. I also noted some plastic pillars dividing the cycling lane. Sometimes I felt a compulsion to crash on them, until…I did. Careful! Gloves are essential to protect your hands from road rash, believe me.

When I saw the George Washington bridge, at a distance, I decided to get there. I wanted to test my limits.

By the Hudson’s side I passed by a museum on the land and a floating one. Later, I rode at a park running parallel to the Central Park, until my path became quite narrow. If I had crash, I could end up in the river!

The hard riding pays, because at north of Manhattan, past even the Harlem, the cycling lane becomes much wider and there’s a park where families enjoy barbecue, play volleyball, and listen to loud Latino music and hip-hop. The joy and mix of people enjoying their weekend is intoxicating. It felt like a culture event.